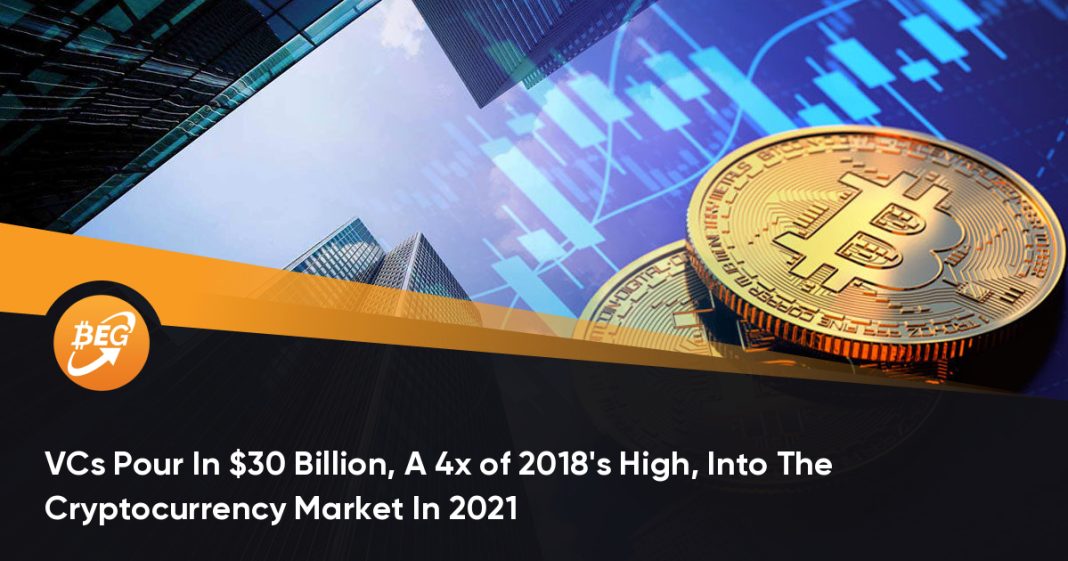 Venture capital funds have poured about $30 billion into the cryptocurrency market in 2021, which is more funding than all the previous years combined.

In March 2020, the total crypto market cap went down to $143 billion and started 2021 just above $775 billion to reach the peak of $3 trillion in November, as per CoinGecko. As of writing, the crypto market cap is around $2.2 trillion.

Just as the crypto market has grown, so has the money flowing into the industry, and the 2021 high is almost 4x of the 2018 funding high, according to PitchBook data.

“Investors are funding anything and everything,” said PitchBook analyst Rob Le. The venture capital transactions of the US have also grown to about $7.2 billion in deals, 4x the previous record set in 2018.

Established firms like Digital Currency Group, the parent company of Grayscale Investments, Coinbase venture, and Polychain Capital are betting on the next big thing in crypto.

“We’ve moved beyond just digital gold. We’ve got financial services, art, gaming as a subcategory of NFTs, Web 3.0, decentralized social media, play-to-earn — all of that made investors think “we don’t have enough exposure,”’ said Spencer Bogart, general partner at San Francisco-based Blockchain Capital. The company has financed over 120 companies since its inception in 2013.

AnTy has been involved in the crypto space full-time for over two years now. Before her blockchain beginnings, she worked with the NGO, Doctor Without Borders as a fundraiser and since then exploring, reading, and creating for different industry segments.

Ripple Price Falls Below $0.43 As Bears Take Control Of The Market

Ripple Counsel Slammed US SEC For Trying To Bankrupt Crypto